Last weekend I went to Brooklyn for an amazing Mountain Goats concert. It was super good.

Here is the setlist from the concert. It was an amazing collection and between all the songs John Darnielle explained where he was coming from. It gave me a whole new appreciation for his new album Transcendental Youth, which you can stream for free from Rolling Stone.

In other NYC news: I ate a falafel (and dropped a lot of it on myself) right outside of the Comedy Cellar. I imagined Louis CK coming by with a slice of pizza. We would stare into each other eyes and eat together forever. But that didn’t happen. 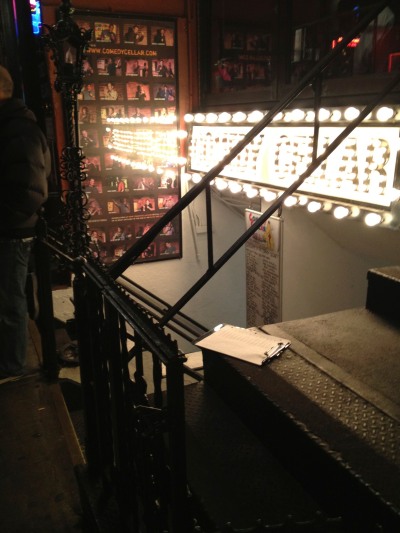 The First Day of My Life: A Deep Sad Look

So I was planning on making a joke on here. Something along the lines of “My mom just bought Badminton rackets and this song played in my head when I saw them.”

..but then I rewatched the video and I brought it to a much darker place.

I really would love for this to be researched further. So internet, if you know someone in that video… tell me their relationship status cause I am feeling pretty confident about this.

Laura Stevenson and the Cans on Awkward

So merely moments ago I was watching the newest episode of Awkward which is an MTV show I watch every week and am somewhat embarrassed about, but I don’t stop because ehhh. Anyway, while I was watching I heard the fantastic Laura Stevenson and the Cans‘ song, The Healthy One.

An Analysis of Pop Songs: “Marry You”

I have taken a long break from listening to radio pop songs, but I recently have been spending a lot of time on 8tracks which means silly radio pop songs always seep in. I know these songs aren’t created for analysis, but a lot of the time I can’t stop myself. So here it is the flaws of Bruno Mars’ Marry You.

I understand the concept of marriage. I am not sure it’s for me, but I get it. You get married when you love some one and are committed to the concept of being with that person until you die (or they die).

From that definition you can see I am not necessarily a romantic, but even I was taken back by the first stanza. “It’s a beautiful night, We’re looking for something dumb to do. Hey baby, I think I wanna marry you.”

This guy’s intro to his proposal is, “I’m looking for something dumb to do.” There are plenty of other dumb things he could do instead: lock his keys in the car, call his boss while on the toilet, facebook stalk his ex, drink beer before liquor, quote family guy in dinner conversation.

“Is it the look in your eyes, Or is it this dancing juice?” At this point we find out he is either drunk our got an exclusive tasting of a new Welch’s juice that will be out in the next month or so:

I think Bruno is having a disconnect where he doesn’t realize what marriage means. “If we wake up and you wanna break up that’s cool. No, I won’t blame you; It was fun girl.” Once you are married you don’t “break up”. There are papers… probably a lot of them. And if I were to be served annulment papers the day after my wedding, I can only imagine the words out of my mouth would be, “It’s cool. I don’t blame you. It was fun.

Maybe Bruno Mars is really in love and he is just bad at timing. He was planning on doing a romantic dinner and popping the question, but he got nervous and then got drunk and now is suggesting elopement. No matter what his reasoning, I think my answer to Bruno Mars’ proposal is “nah.. I’m alright. You seem really nice, but perhaps you should switch to water for the rest of the night.”

The Armageddon of Music

Today, I thought of a doomsday scenario.. lets hope it never happens:

What if Taylor Swift was in a loving relationship and got married.

She would only be able to release EPs from then on. We would be stuck with songs like Our Song and Mine, while all of her crazy vindictive stuff would be left in the dust.

Lets hope she continues her on and off again relationships or else You Love Me, Despite My Hair in the Shower Drain will be playing on the radio.

So I have been listening to a lot of Nina Simone. And I noticed that the beginning of this song, sounded mighty familiar.

(Also I like the typography stuff they did there.)

Well the reason it sounds so familiar is because “Feeling Good” is also used at the beginning of “New Day” on Jay-Z and Kanye’s album, Watch the Throne.

New single “Money” by the Drums from their upcoming album Portamento coming out September 12th.

If the Smiths and David Bowie and the Beach Boys all had a baby together it would be the Drums. Maybe they did, we’ll never know.

The first draft of the Mountain Goats song “Dance Music”. Check out the Atlantic Article in which John Darnielle talks about how the song happened. 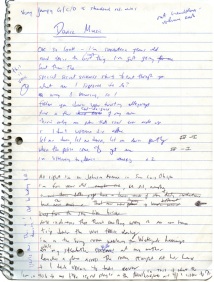